Concerns on the DRM Special Use Permit B1300031

Our Neighborhood received notice May 9, 2014 stating that The Durham
Rescue Mission submitted a Special Use Permit 4/9/14 to build (3) 3
story high buildings on 3.22 acres of their property already zoned RSM
for a commercial dormitory. The hearing is scheduled for Tuesday May 27, 2014 @ 8:30am.

One of our main issues being that the storm water would be run into
the neighborhood two blocks away on a wet pond. The current storm
water plans are not representative of Best Practices in Storm Water
Treatment in an Urban Compact Neighborhood. Also noting the We and
especially the 1100 Block Property Owning Neighbors on Franklin and
Wall Street’s have strong concerns about all of the 3.22 acres of
storm water in such a small area with the possibility of runoff from
the Alston Avenue Road widening.

The other issue being that the building structures are unharmonious to
the community and the nationally registered historic district.

Also noting that the current plans are not representative of Best
Practices in Urban Design in a Compact Neighborhood.

In addition to our Storm water & Best Practice concerns, we would like to note:

We received the notice on or about May 9, 2014 and would like to
request a delay or continuance to the hearing for the Special Use
Permit to have experts review the plans to be able to address the
Board of Adjustments. With less than three weeks to review and prepare
we need more time.

We as a community have concerns about the circumventing of the zoning
process, because we submitted a valid protest petition regarding these
same plans. They are just being broken down into phases. We held a
neighborhood Planning and Design Charrette in 2011 with the Downtown
Area Design group DADS to talk about the concerns of building and
asked questions about the rescue missions expansion but did not get
any answers.

We as a community have concerns about the Rescue Mission calling
itself a Commercial Dormitory.

We as a community have a concern about the Rescue Mission as a Drug
Treatment Facility located in our neighborhood that does not used
evidence based practices or the North Carolina standards for a
treatment facility for persons with psychiatric, alcoholic or drug
problems.

We are also concerned about the fact that the Durham Rescue Mission
just built the Center for Hope. It has been almost year November 13,
2013. There have not been any invitations to talk about the plans or
future construction in the community.

Since interfacing with the Durham Rescue Mission the communication has
not been forthright and open regarding their design plans or their
number collection process so we have cause for concern on a number of
fronts.

You can view the information and documents on the city website links listed below.

Well we have been out of the loop, but nothing like a good birthday to spark that ‘things to do’ planning bug. With plenty of activities to choose from, all around and downtown we should all get out and enjoy. We are headed to checkout some of them tonight.

For today alone- here’s a link. There’s too many to list.

In our neck of the woods I would like to highlight

There is something for everyone …

With Mothers Day & Father’s Day around the corner here are some helpful sites.

The schools are listed by proximity, because we all know my preference for the Rams.

Back to School Community Day in East Durham

·  Greater Emmanuel Temple of Grace, Greater Word Empowerment Church and Nehemiah Christian Center have joined forces to host a c on Saturday, August 11, 2012 from 10am to 2pm, at Greater Emmanuel Temple of Grace (2722 E. Main St.). This all-day, fun event is a celebration of education and community. We endeavor to enable community parents/guardians to kick off their child/children’s 2012-2013 school year with a great start, complete with food, school supply giveaways, attractions, services such as health screenings, haircuts and hairstyles and more all free to our most-valued neighbors! It is also our goal to raise awareness of the wealth of resources that are at our community’s disposal by featuring tables that showcase the programs and services that are offered by various community organizations. By choosing to participate, you will be asked to setup a display with representatives to inform attendees of your organizations’ services.  Tables will be provided.  To learn more or register to participate, please contact our Community Organizer by July 15th, Mr. Demarcus Williams, Evangelism/Outreach Director at Greater Emmanuel Temple of Grace Church at: adwilli3@gmail.com (email) or 919.818.6799 (phone).

Local Historic District Designation – 2 years of waiting and we may have an outcome.

Local Historic District Designation Meeting with the City Planning Department- Next Thursday 5/24/12. Notices distributed in and received from the city recently. The meeting will be held in GB Building 2 NIS conference room.

·         ·  The InterNeighborhood Council of Durham has organized a County Commissioners’ Candidates forum for Wednesday, March 28, from 6:45 to 9:00 P.M. at the North Carolina Center School of Education Auditorium (710 Cecil St., Durham 27707). All fourteen candidates for Durham County Commissioner have agreed to participate that evening. Doors will open at 6:30 PM.
All five Commissioner seats are up for election this year, and, because there are only Democratic candidates running, the Democratic May primary may be tantamount to election. Bob Ashley, former editor of the Herald Sun and current Executive Director for Preservation Durham, will be the moderator that evening. If you are registered to vote as an independent or unaffiliated voter, you may vote in the Democratic primary.
You are invited to hear what these candidates have to say because five of them will make important decisions about life in our community as they govern the county.  It’s helpful to remember the difference between county and city services. Here’s a simple way to think about it: Durham County is responsible for “soft services”– education, social programs, etc., and the County Commissioners set priorities (and tax rates) for these. Durham City is responsible for “hard services” –fire, police, physical plant and city street maintenance, and Durham City Council members set priorities (and tax rates) for those.
There is easy parking near the auditorium. The auditorium is located at 710 Cecil Street, Durham NC 27707. Driving directions to the NCCU Campus may be found at http://www.nccu.edu/discover/drivingdirections.cfm
Durham InterNeighborhood Council (INC) organized in 1984, is a coalition of Durham’s neighborhoods and homeowner associations. Its mission is to promote the quality, stability and vitality of Durham’s residential neighborhoods

BLEND to lend space to GBNA

One of the hot new additions to the Golden Belt Neighborhood is restaurant/cafe Blend. This hip contemporary cafe and frozen yogurt shop is a morning must with their fresh brewed coffee and comforting muffins. I am hooked!

As owners Courtney and Camryn Smith of Sudie’s Fresh Baked Goods, blend with Howard Udell, of Yogen Fruz we have a new breakfast, lunch or snack option.

With our GBNA meeting held on 3rd Thursdays, we look to hold future neighborhood meetings in the shop.
Blend is open 7 a.m. to 7 p.m. Monday through Friday and 9 a.m. to 3 p.m. Saturday. 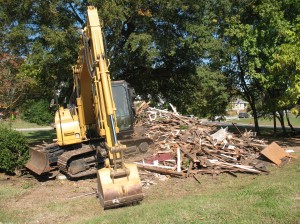 On Tuesday, October 18, 2011, the Durham Rescue Mission destroyed three more historic houses in the Golden Belt National Register Historic District. Last week, the Rescue Mission had allowed the Durham Fire Department to conduct training exercises which involved cutting up parts of the roofs and sides of the houses. The final destruction came today.  Two of the houses were on Worth St., and one was on Franklin St.

All of these houses were already designated as contributing structures to the Golden Belt National Register Historic District when Ernie Mills bought the properties. Obviously he doesn’t care.

At various public meetings and in private conversations with Preservation Durham, Ernie Mills promised that he would let people move the houses. That didn’t happen. He didn’t even allow people to salvage the historically valuable materials in the house. It’s all just a pile of rubble now that goes to the landfill.

But one question remains: how can anyone believe his future promises when he hasn’t kept the ones he’s already made?